Nadia P. Bermudez is an AV®-Preeminent™ rated employment and business litigation attorney with Klinedinst PC. She represents businesses, public agencies, and individuals in state and federal courts in a wide range of employment matters such as harassment, discrimination, retaliation, wage and hour compliance, wrongful termination, defamation, and trade secrets cases, as well as ADA litigation.

Ms. Bermudez is adept at helping a wide variety of clients navigate the increasingly-complex business environment in California. In 2019, she received the San Diego Business Journal’s Leader in the Law Award for Employment to recognize her contributions to company growth, leadership and community involvement by top legal professionals in the San Diego area. She has been featured in San Diego Super Lawyers for Employment Litigation (San Diego) each year since 2015, was named a Top 25 San Diego Woman Super Lawyer for 2019-2022, and a Top 50 San Diego Lawyer.  Ms. Bermudez is also a sought after trainer in the areas of harassment prevention, reasonable accommodation and disability law, and diversity and inclusion.

Ms. Bermudez also provides workplace investigation services and is a member of the Association of Workplace Investigators.  Her expertise includes handling investigations involving harassment, bullying and abusive conduct, bias, workplace threats, retaliation, and fraud, among other allegations of misconduct.

In 2021, she was appointed by the San Diego Superior Court to serve on the Anti-Bias and Legal Equality Committee (ABLE) Committee.  ABLE is comprised of judicial officers and attorneys collaborating with justice partners to promote and support equal access to the courts.

In 2019, Ms. Bermudez was appointed by Governor Gavin Newsom to serve on the Regional Judicial Selection Advisory Committee for the evaluation of judicial applicants. The same year, Ms. Bermudez was selected to serve as Chair of the Merit Selection Panel for the Southern District Court of California. She also served as Co-Chair of the Lawyer Representatives for the Southern District, completing her service in 2019.  Ms. Bermudez is a past-President of Lawyers Club of San Diego and a past-President San Diego La Raza Lawyers Association. Due to her dedication to diversifying the practice of law, she received a Service Award for Diversity from the San Diego County Bar Association in 2015. Previously, she had served on the Board of Directors of the San Diego County Bar Association and as Vice-President. In 2011, she was 1 of 5 honored as a Top Young Attorney by the Hispanic National Bar Association.

Ms. Bermudez received her B.A. from UC Irvine in 1998 and her law degree from Stanford Law School in 2001. 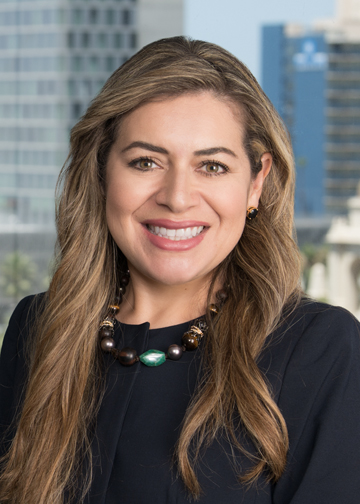